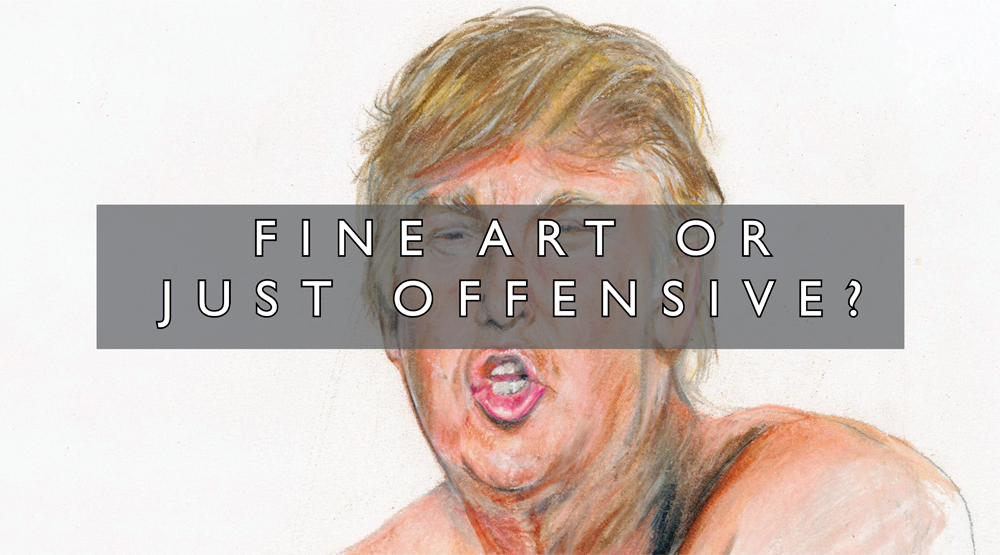 THIS POST IS A DUPLICATE OF AN ARTICLE FIRST PUBLISHED IN DECEMBER 2017.

This article deals with the issue of changing attitudes and attempts to provide a general guide to uploading artists when considering if their artwork is acceptable to sell on the ArtMarketDirect.com platform as well as give information to those who might be offended by an image on the platform.

If you see an image on ArtMarketDirect.com which you find offensive

If anything displayed on our site causes you offense, please email us the URL of the offending upload and we will conduct an investigation.  In all cased we will apply the reasoning outlined below.

Everything is Art, right?  Wrong.

Pan and The She-Goat, statue from Villa of the Papyri, Herculaneum discovered in 1752.  The erotic statue caused the British Museum to install a “parental guidance” warning in their exhibition, “Life and Death in Pompeii and Herculaneum” when it displayed Pan having intercourse with a she-goat in 2013. The work, probably made between A.D. 1-20, was one of many sexually-themed pieces from the time, and was most probably seen as comical and amusing by its Roman contemporaries where images of sex and extreme violence were ubiquitous whereas today it would be considered vile or lewd.  What was once commonplace is now potentially very offensive. CREDIT: TELEGRAGH.CO.UK

Japanese Shunga:  The earliest surviving examples come from the period 1600 to 1650. The high quality materials used in their creation indicate the artists were commissioned and patronised by the very richest in society. It was during this period, with the growth of cities, especially Edo, that the Samurai government presided over the growth of a so-called ‘floating world’ of pleasure-seeking, brothels and the immensely popular kabuki theatre. From around 1650 cheaper woodblock-printed shunga were produced in large quantities for townspeople, showing more ordinary folk in a wide variety of sexual activity, alongside the continuation of high quality painted items for aristocrats.  What was once commonplace is now potentially very offensive. CREDIT: https://www.pinterest.co.uk/pin/292241463297491722/

A gay coupling, created by sculptor Gustav Vigeland in 1924, sits in the middle of Frogner Park in Oslo. Created at the time which would have seen a public statue portraying obvious homo-erotic intimacy would have been offensive to a prejudiced and in some cases deeply homophobic western audience but these days (in the West at least) it’s just a statue of two people being affectionate. What was once very offensive is now increasingly (if not completely) inoffensive. CREDIT: FRANK SMOUT IMAGES

South Korea’s Love Land, opened in 2004 and Love Art Park in Thailand opened in 2014.  Both are veritable family orientated theme parks filled with oversized sexually suggestive and explicit sculptures.  Would this be acceptable in the West where attitudes to the human form and sex in particular are still informed by taboos associated with original sin and the corrupting nature of nakedness promoted by the European Catholic church? CREDIT: TOURDESKPATTAYA.COM

All of these examples help to demonstrate a broad spectrum of dynamically shifting sensibilities.  How some depictions which were common in the past now are lewd or vile whilst at the same time what was generally offensive in the past is now, as in the case of the artwork by Gustav Vigeland, even considered by many to be irrelevant to the question posed.

Obviously, there are many fine artists to be found continuing the long tradition of depicting the human form in ways which are clearly not pornographic whilst still being able to offend whilst all are absolutely considered fine art.

Other works of art can be intentionally provocative, including works by:

Some of the artworks by the artists listed above at their moment of creation and exhibition were headline grabbers and they pushed ‘what is acceptable’ beyond the old frontier sometimes by being explicit or humorous.   Some were banned or refused publication or sale through mainstream outlets.   Many of their works would be allowed to be uploaded to ArtMarketDirect.com without issue.  It may well be that in some cases a debate would occur first, but ultimately the non-porno representation of genitalia as art would win the debate.  Only in a few cases can we see a potential issue of offense being caused to the point of a product being removed.

Facebook with its thousands of niche art groups and overarching ‘community guidelines’ has created a new ubiquitous level of consensus achieved acceptability which in many artists opinions prohibits pieces of art as unnecessarily ‘offensive’.   Obviously, the algorithms used by Facebook must err on the side of caution in a world where exploitation, abuse, and online bullying can all have terrible impacts on their victims all by the use of flesh-toned images.

The second phenomenon of human behavior in the West, which might be linked at least in part to the Facebook measure of acceptable, is emerging.  A new level of ‘virtue signaling’ has arisen where people almost compete to be offended or outraged by all manner of things which in the past they might never have known about or never been exposed to or if they had (certainly during the post-WWII libertarian decades of ’50’s, 60’s, 70’s and 80’s) they most probably would have considered it simply risque or funny.  This new zeitgeist of the puritanical display en-masse in public life works by virtue of condemnation.  A person can publicly condemn something which in all likelihood has nothing to do with them.  By being outraged by something they have labeled as bad, they have signaled to their peers and the world that they are, by definition, ‘good’.

This has resulted for example in Facebook blocking nude paintings created hundreds of years ago which at the time of their creation were neither offensive or pornographic; merely the epitome of high art and culture because someone on the internet was offended at the sight of an old painting.  This, of course, is a nonsense.

The reason for discussing the ‘Facebook effect’ is purposefully to highlight the importance of the human eye when reviewing whether or not a piece should be censored.

Our red lines of Offence

At ArtMarketDirect.com we want to be open-minded but that liberalism needs to recognize that we are not a site for over 18’s only and the primary purpose of the site is as a commercial operation which needs to appeal to the masses; not offend them.  That does not mean artistic merit of provocative subject matter or composition will ever be blocked in an effort of censoring our content.  What it does mean is ‘be mindful’ when you upload your work.

Rather than provide a long list of anatomical details which are acceptable, we consider four questions to help us define what is not welcome in an upload to ArtMarketDirect.com:

A) Is there ‘Penetration’?

Genitalia can be shown but not in any way which focusses on penetrative sex or sex acts in any shape or form.  This is where we believe the offense line is crossed.

B) Is ‘Gratification’ the purpose?

Where the subject or composition of a piece is to create sexual gratification to the viewer.  This is where we believe the offense line is crossed.

C) Is there ‘Stimulation’ depicted?

D) How graphic is it?

If for example A & C above were confirmed but the portrayal is symbolic, or metaphorical or simply beautiful without being vile, there is room for an artist to make a case for artistic merit.

We have no algorithm

In all cases a human judgement will prevail and when after all is said and done, the decision taken by management of our site will be final.

There are subjective guidelines which we hope artists will consider when uploading their work.  It does allow for interpretation – but common sense must prevail.

If we are notified of offence to a collector who considers a piece of artwork meets our guidelines for what we consider to be offensive (and therefore unwelcome), we will:

In all cases, we are open to discussing the issue with the uploading artist to try and resolve any miscommunication or misunderstanding.  If a case for publication can be made to us we will discuss it at ArtMarketDirect.com Basecamp and if we can be convinced by the artist of the artworks artistic merit, then a new frontier of what is acceptable may be reached.  In all cases, our corporate responsibility will take precedence over ‘making a point’.  But we do want a debate with our uploading artists.  We like that a lot.

What if the artwork does show something which would be considered unacceptable?

If you have artwork which you suspect is unacceptable but generally is fine?  In the same way as many artists promote ‘questionable’ work on Facebook which otherwise breaks the community guidelines, you can upload an ‘obscured’ or edited version of the image to your gallery and in the description ask potential collectors:

*This work is in the public domain in its country of origin and other countries and areas where the copyright term is the author’s life plus 100 years or less.

Email us.With ArtMarketDirect.com artists are able to take control of their own careers, list their own pieces for sale to collectors and undertake their own fulfillment of orders.The only stipulation on ArtMarketDirect.com is that the work you list is your own and is original. Where prints are for sale, we ask that all image copyrights belong to you and that you are legally disposed to sell the pieces you have on offer.The site is FREE to use with only 10% sales commission OR for those willing to bet on themselves with only a nominal subscription (from less than £1/month) to upload unlimited artwork and very low 3% commission on sales. If you are a creative ArtMarketDirect.com is the best option you have.

What is Open Studio?

Why You Should Always Frame Artwork You Offer For Sale

7 Ways You Can Develop Your Work